Historically, the guitarist who worried about his technical problems and performance anxiety automatically turned to the great masters of the guitar to find the answers to his questions. But what if the information transmitted by way of tradition did not provide all the answers? Biomechanics and the psychology of performance have been used by athletes for many years in order to overcome obstacles-both physical and mental. The consequence of this marriage of science and sport was an exponential increase in athletic performance. In this website, the author shows that all knowledge is transferable to the practice of the instrument. He explains how biomechanics and performance psychology address these questions and how they have the ability to help the guitarist to maximise his physical and psychological potential. Based on sound science rather than dogmatic theory, it offers a guide to harmonising the body and mind, with the ultimate goal of freely expressing the music within. 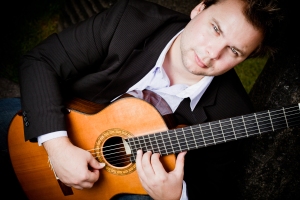 Recognized for his energetic playing, his great virtuosity and his deep musical sense, guitarist Jean-François Desrosby has displayed his talent on the stages of the world. His formidable stage presence, marked by his ability to captivate and fascinate his audience, is lauded by critics.

Two solo albums have been received with enthusiasm and have garnered numerous positive reviews.

A unique technique with a scientific basis

A hand injury forced Desrosby to rethink his technique from the base. Extensive research in the fields of biomechanics and performance psychology have allowed him to pursue his career as a concertist.

This knowledge also led him to a doctorate in the subject and inspired him to write the book Classical Guitarists: Unlock Your Potential! in 2011.

In addition to his enthusiastic teaching at the Université de Sherbrooke where he is head of performance/creation and Graduate diploma in developing and producing an artistic music production (D.E.S.S. en développement et réalisation d’une production artistique en musique), Jean-François Desrosby is in demand as a pedagogue. He regularly presents master classes and lectures for universities, conservatories and prestigious organizations such as the Guitar Foundation of America.

The scientific aspect of his approach has been instrumental in the modernization of teaching guitar. It thus eclipses the more traditional method of teaching music often found in technical schools.

Jean-François Desrosby has been awarded highest distinction in guitar from the Music Conservatories in Quebec.He is a numerous time grant recipient of the Quebec Council for the Arts and Letters and  from the Canada Council for the Arts. He also has been awarded scholarships from the Université de Montréal (doctoral), the Office franco-québécois pour la jeunesse and the Mc Abie Foundation, now known as the Wilfrid-Pelletier Foundation.

” Desrosby Rocks! ” This Is Classical Guitar

” Equaling the energy of a rock band – move aside Hetfield! ” Classical Guitar Canada

” He has much of taste and the true meaning of music.” InfOpera

” I was impressed by the purity of his interpretation and his ability to captivate his audience ” (R. Servin. Dir. FIGI, Mexico)